Mr. Ferguson's Classroom
﻿I Am Malala 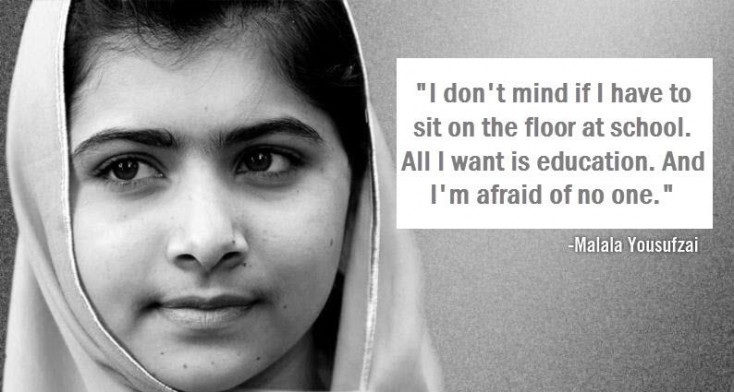 Malala Yousafzai was given the Nobel Peace Prize of 2014, making her (at age 17) the youngest person ever to win the award. Malala Yousafzai became known as an advocate for girls' schools in 2009, when she wrote for the BBC about life in her hometown under the rule of conservative militants in the Taliban. The Pakistani army launched military operations to drive out the Taliban in 2009, and a documentary film helped Yousafzai became internationally famous as a chronicler of the chaos. She was nominated in 2011 for the International Children's Peace Prize, and that same year won Pakistan's first National Youth Peace Prize (now called the National Malala Peace Prize). However, while riding on a bus from school in the Swat Valley of Pakistan on 9 October 2012, Yousafzai and three other girls were wounded by two gunmen. The Taliban claimed credit for the shooting and vowed to kill Yousafzai for encouraging western ideas, specifically the education of women. Malala Yousafzai was seriously wounded in the head and neck and airlifted to a British hospital for safety reasons and for specialized treatment. She recovered and became an advocate for education for girls; in 2013, Time magazine put her on its list of the world's most influential people. The next year she shared the 2014 Nobel Peace Prize with Kailash Satyarthi, an Indian activist and founder of the Global March Against Child Labor.


Extra credit:Malala Yousafzai was still a student at the Edgbaston High School for Girls near Birmingham, England when she won the Nobel Prize; The New York Times reported that "she was summoned out of her chemistry class to hear the news"... Although they shared the Nobel Peace Prize, Malala Yousafzai and Kailash Satyarthi are not related and don't otherwise work together... The two shared a prize of 8.0 million Swedish kroner, or roughly 1.1 million US dollars, so each received about $550,000.  --infoplease.com