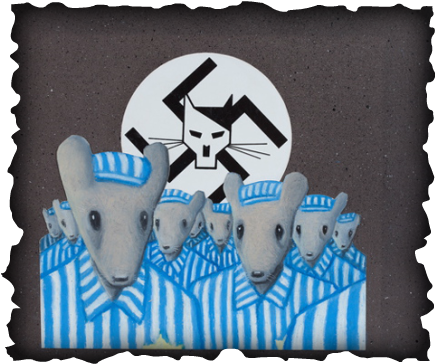 Art Spiegelman was born in 1948 in Stockholm, Sweden, the son of Andzi (Anja) and Vladek Spiegelman. The family moved to Rego Park, New York in 1951. Spiegelman demonstrated an early interest in comic books. Popular horror com- ics, Mad, underground comics, television, as well as pop and high art were all formative influences. By adolescence, Spiegelman was seriously involved in comic making. As Spiegelman tells us, the underground comic movement developed in the 1960s while he was in junior high school:

"I met some people who later became, like myself, that first generation of underground cartoon- ists – like Jay Lynch, Skip Williamson. We were all working for the same little magazines. They were amateur self-produced magazines." (Dreifus, 36)

Chapters of maus were first serialized in 1980 in Art Spiegelman's avant-garde magazine Raw. maus, a survivor's tale i: my father bleeds history was published in 1986 and maus, a survivor's tale ii: and here my troubles began in 1991. The two volumes won a Pulitzer Prize in 1992 with the creation of a special category to honour the originality of the work. The acclaim and public attention that fol- lowed the publication of maus came as a surprise to Spiegelman.

"One of the reasons I wasn't ready for the response to maus is that I was living in a world where comics were being made seriously and taken seriously. So, to me, it was very natural."
(Dreifus, 36)

"There's a kind of shock in people's minds when they hear that this story is a comic strip – 'Somebody did a comic strip about the Holocaust.’

Actually, that invests it with a certain lack of hubris. It's not an opera about the Holocaust; it's something modest, it's a comic strip – a medium that has a history of being without pretensions or aspirations to art. And perhaps if there can be no art about the Holocaust, then there may at least be comic strips." (Dreifus, 35)

Despite the acclaim, Spiegelman experienced angst and misgivings about his work. This self-doubt is expressed both in the text (I.16) and images of maus, where he is diminished in size (II.2, II.46).

Today Spiegelman is acknowledged as one of this generation's foremost comic artists. Co-founder and co-editor of Raw with his wife Françoise Mouly, the acclaimed magazine of avant-garde comix and graphics, Spiegelman has become widely known for maus and his current work as a cover artist, contributor and consulting editor for the New Yorker magazine.

Framing/Frame Narrative/ Story within a Story